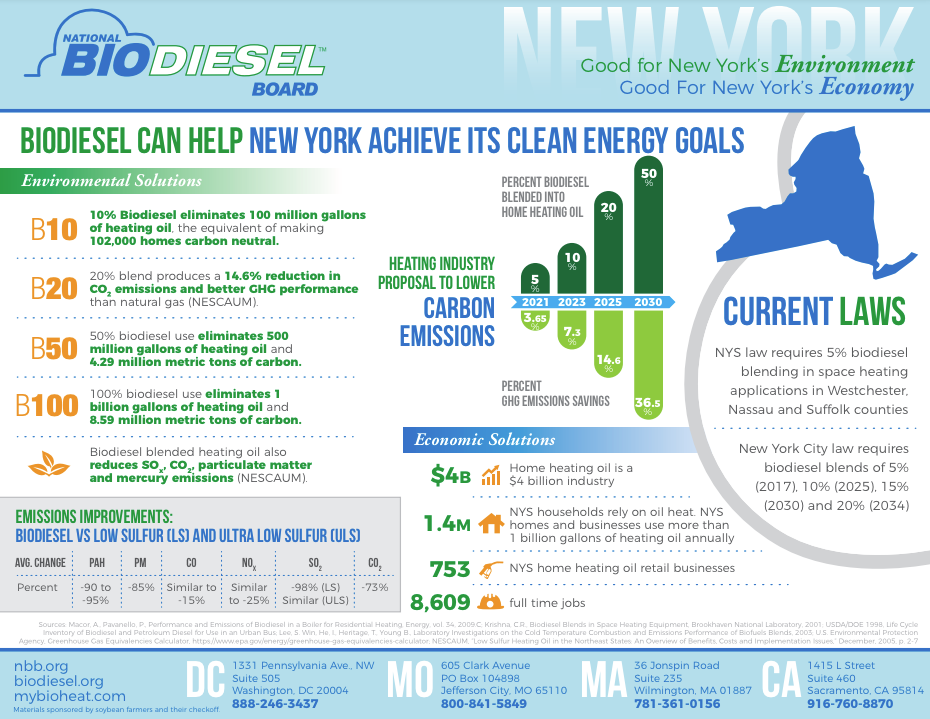 An infographic demonstrating how biodiesel can help New York achieve its climate goals; the "current laws" will soon be updated to reflect the new statewide blending standards.

Liquid heating fuel is on track to continue reducing its carbon footprint across the Northeast U.S. In recent weeks, the state legislatures of New York, Connecticut and Rhode Island passed bills that would create new biofuel blending standards for all liquid heating fuel sold in each state.

New York State already requires all liquid heating fuel sold in Westchester County and Long Island to contain 5% biodiesel. New York City also requires B5 and was scheduled to increase its minimum blend to B10 in 2025, B15 in 2030 and B20 in 2034. The new bill would replace these requirements and call for more biofuels sooner across the whole state. Rhode Island's existing blending standard would be expanded to include renewable diesel as well.

New York, Connecticut and Rhode Island have laws and policies in effect calling for steep emission reductions over the coming decades, including net-zero emissions by 2050. The new biofuel blending standards were designed to help these states reach their climate goals without economically burdening underserved communities.

It’s estimated that Connecticut’s B50 standard would reduce the state’s petroleum use by 238 million gallons and eliminate 2 million metric tons of carbon emissions. That's equal to the emissions of 5 billion miles driven by an average passenger vehicle. A B50 standard in New York, which the state’s heating fuel industry supports, would reduce carbon emissions by 4.29 million metric tons, the equivalent of over 10 billion miles driven.

On behalf of the entire Net-Zero Hero movement, we would like to congratulate the residents, businesses and policymakers of New York, Connecticut and Rhode Island for a job well done. The passage of these bills is a critically important step on the path to a more equitable and sustainable net-zero future.

Why Bioheat is Better

How Bioheat Can Improve Your Health

Brought to you by your local Bioheat® Fuel dealer and these associations: