How Do We Get to Net-Zero Carbon Emissions? 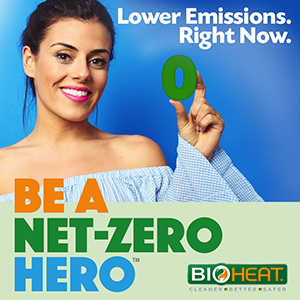 Most environmental scientists and, by now, most politicians and “regular folks” as well agree that reducing carbon emissions is necessary to limit or even reverse catastrophic climate change. There may be broad consensus over “what” needs to be done, but there are many opinions on “how” to get there: How do we get to net-zero carbon emissions, and how can we do it quickly and cost-effectively? If you ask a Net-Zero Hero™ you will probably be told that Bioheat® fuel is the answer!

Let’s back-up a little. Carbon dioxide (CO2) is one of several greenhouse gases (GHG) that are linked to climate change. Carbon dioxide is a natural part of the Earth’s carbon cycle, but human activities including transportation, electricity, and industrial processes have added so much CO2 into the atmosphere that this cycle has been altered, leading to climate change. Getting to Net-Zero Carbon emissions will mitigate some of the ongoing damage, and hopefully forestall any catastrophic events. Net-Zero is reached when the amount of carbon dioxide produced is offset by actions to remove an equivalent amount of carbon dioxide from the environment.

We can’t just flip a switch and get to net-zero. With virtually every aspect of our modern lives tied to carbon producing activities, step one is for every country – and every individual – to commit to lowering their carbon dioxide emissions.

When you use Bioheat® fuel, you are already reducing your carbon footprint. In Metro New York – the Five Boroughs, Nassau, Suffolk and Westchester – every gallon of heating oil used in homes, businesses, apartment buildings, etc., must contain at least 5% biodiesel (B5) and will increase incrementally until it reaches B20 (20% biodiesel) in 2034.  Your local  Bioheat® dealer is working with leaders in the home heating industry to reach much more ambitious emissions reduction goals, and distribute B20 by 2023 for a 15% reduction in CO2 emissions; B50 by 2030 for a 40% reduction, and a fully net-zero carbon renewable liquid home heating fuel by 2050.

These are changes that can be made immediately – in fact, New York Metro region homeowners were switched to Bioheat® fuel automatically, and blends up to B20 can be used without making any modifications to current oil-fueled heating equipment. Studies are underway on blends higher than B20 and it appears that most systems can process greater levels of biodiesel with only minimal, inexpensive equipment modifications.

That is a far cry from some of the other CO2- reduction options for your home comfort which require the installation of completely new heating equipment and system infrastructure. Net-Zero Heroes™ know that Bioheat® fuel is available right here, right now, and wouldn’t choose any other way!

Have Your Fries … and Heat with Them, Too!

Brought to you by your local Bioheat® Fuel dealer and these associations: